Magnetic gates allow you to accurately gate on populations that may shift slightly between samples.

During your analysis, you may be interested in gating on the maximum number of events of a particular population for several different samples. However, these populations may shift slightly from one sample to the next. For example, the forward scatter and side scatter of a lymphocyte population may differ between splenocytes collected from a wild-type mouse versus splenocytes collected from a mutant mouse. To ensure that your lymphocyte gate remains centered on each lymphocyte population, simply make the gate magnetic.

After you create a gate in the Graph Window, it can be made magnetic by checking the Magnetic Gate check-box in the Active Gate area of the Graph Window. Once you make a gate magnetic, FlowJo moves it to the closest area of maximum events–i.e., it relocates to where the events are densest, based on the gate’s original position. The Workspace displays the presence of magnetic gates by changing the icon to a magnet. 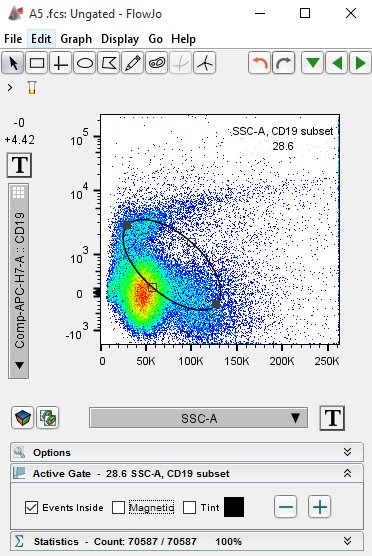 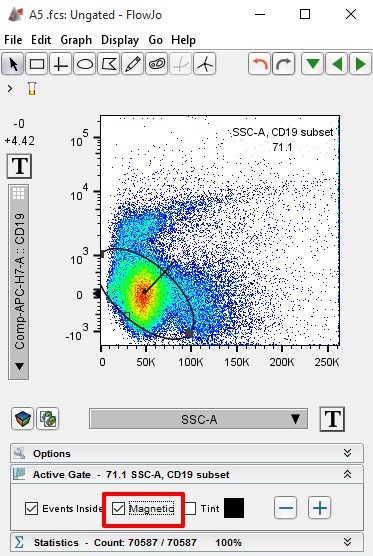 When FlowJo moves a magnetic gate, it draws a black arrow in the graph. The arrow is drawn from where the gate was originally set to where the gate has been moved by FlowJo. If the gate only moves a short distance, you may have to drag aside the white Frequency of Parent label to see the arrow. Gates which move a long distance should be checked for correct positioning!

When you copy a magnetic gate from one sample to another, it is automatically readjusted to encompass the maximum number of events near the gate’s position for the new sample. So in the above example, your lymphocyte gate will automatically shift to be centered of the densest portion of events in both your wild-type and mutant lymphocyte populations. Samples 1 and 2, respectively. In the case where a parent gate is modified, then the magnetic gate of the child population is again recalculated to accommodate the maximum number of events.

Magnetic gates can also be applied to groups. FlowJo will adjust the gate based on the density of events for each sample or sub-population. This is useful for instances where the population may move slightly from sample to sample and you don’t want to have to individually adjust each sample’s gate.

Magnetic gates are, in every other way, exactly like normal gates: you can create subsets and add statistics to populations based on magnetic gates. They are supported in both univariate (histogram) and bivariate gating tools.