Gene Sets are a vital part of any sequencing analysis. These are parameter collections that can represent a wide variety of biological states. Interpreting the meaning of a given gene set within the context of a data-set or experiment can be the most challenging aspect of an analysis.

Gene set enrichment is a process for checking the match between a gene set derived from your data and a library of well-annotated gene sets (known as a gene set library).

It is the responsibility of the researcher to perform proper due diligence when ascribing biological meaning to comparisons made. Please make every effort to ensure proper care is taken when investigating gene sets from literature to employ in a given analysis. Below are some general tips for attaining quality in gene sets:

Note: SeqGeq does not perform synonym matching for gene names, thus the annotations between model, library, and data analyzed should all match.

Any hypothesis supported by Enrichment Analysis should be carefully validated in further studies.

Gene models are, essentially, a set of all genes for a given species.  There are important differences between groups curating/computing these models, such that some are more conservative and others more inclusive.  Note: Currently models must live in the sample space within SeqGeq, in order to be utilized by the enrichment platform.

When possible, researchers should avoid mixing gene identifiers and transcript identifiers in their data upstream. Mixing gene sets from different models requires translating between them, or standardizing on a single model universally.

If users import data from an upstream analysis they like with malformed, ambiguous, and unrecognizable gene symbols, common models won’t map to these annotations. Note: There are also certain gene symbols that have a tendency to get mangled (esp. by Excel), such as “SEP15” which is almost invariably converted to a date.Close attention by the user will be required to catch such errors prior to analysis in SeqGeq.

Many databases are publicly available which contain a myriad of gene set libraries. These are often provided in Gene Matrix Transpose (GMT) format. SeqGeq is compatible with classifiers in GMT, as well as CSV, and TSV formats. The following is a list of popular gene set library sources available to researchers, provided by third party distributors (not maintained or specifically endorsed by FlowJo):

Note: If you’ve identified gene sets you’d like to utilize for classification purposes, SeqGeq can create GMT files from a collection within the Gene Sets pane of the Workspace. To do so, first create a collection of gene sets to combine, then right click on the collection and choose “Export as GMT”.

SeqGeq’s Gene Set Enrichment platform utilizes Fisher’s Exact Test(1) to determine whether a set of genes discovered (the “test”) overrepresents a function defined by a library of known gene sets (the “controls”). In other words, it checks how closely the test matches controls.  SeqGeq uses a one-sided test to check for enrichment only, not depletion.

To run enrichment tests in SeqGeq, right click on the test gene set of interest and select “Enrichment Test”. 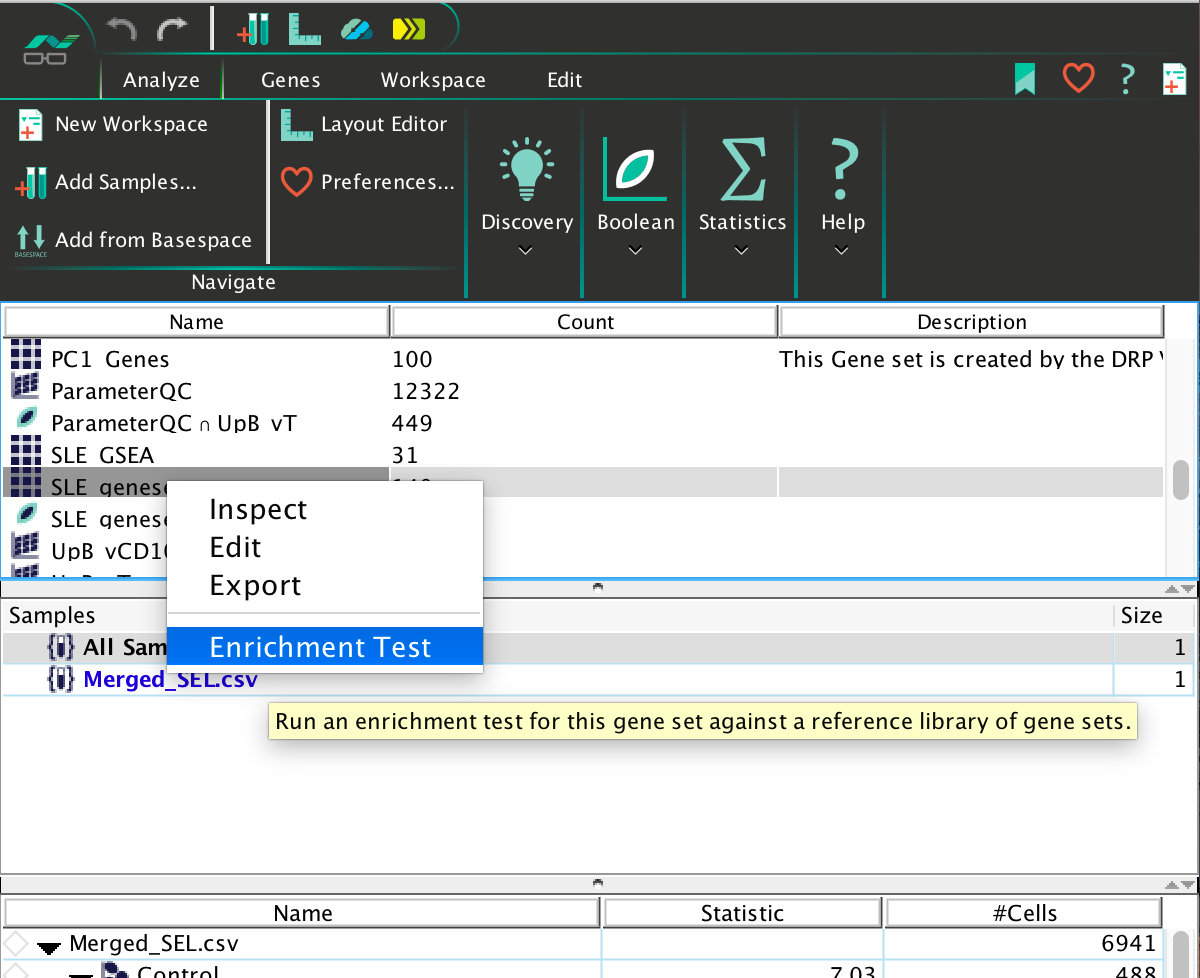 Within the resulting dialog, select the gene model used. It is sufficient to use the sample itself as its own gene model if the sample contains all of the genes assayed/quantitated.  Otherwise, select another gene model (or another sample) that contains the correct set of all genes.  Using a gene model that is too large or too small will affect the correctness of the enrichment analysis.  If you have multiple samples, using a common gene model (if appropriate) will improve performance.

Within the same dialog select the gene set library to compare with, and a sensible p-value threshold to filter comparisons for display: 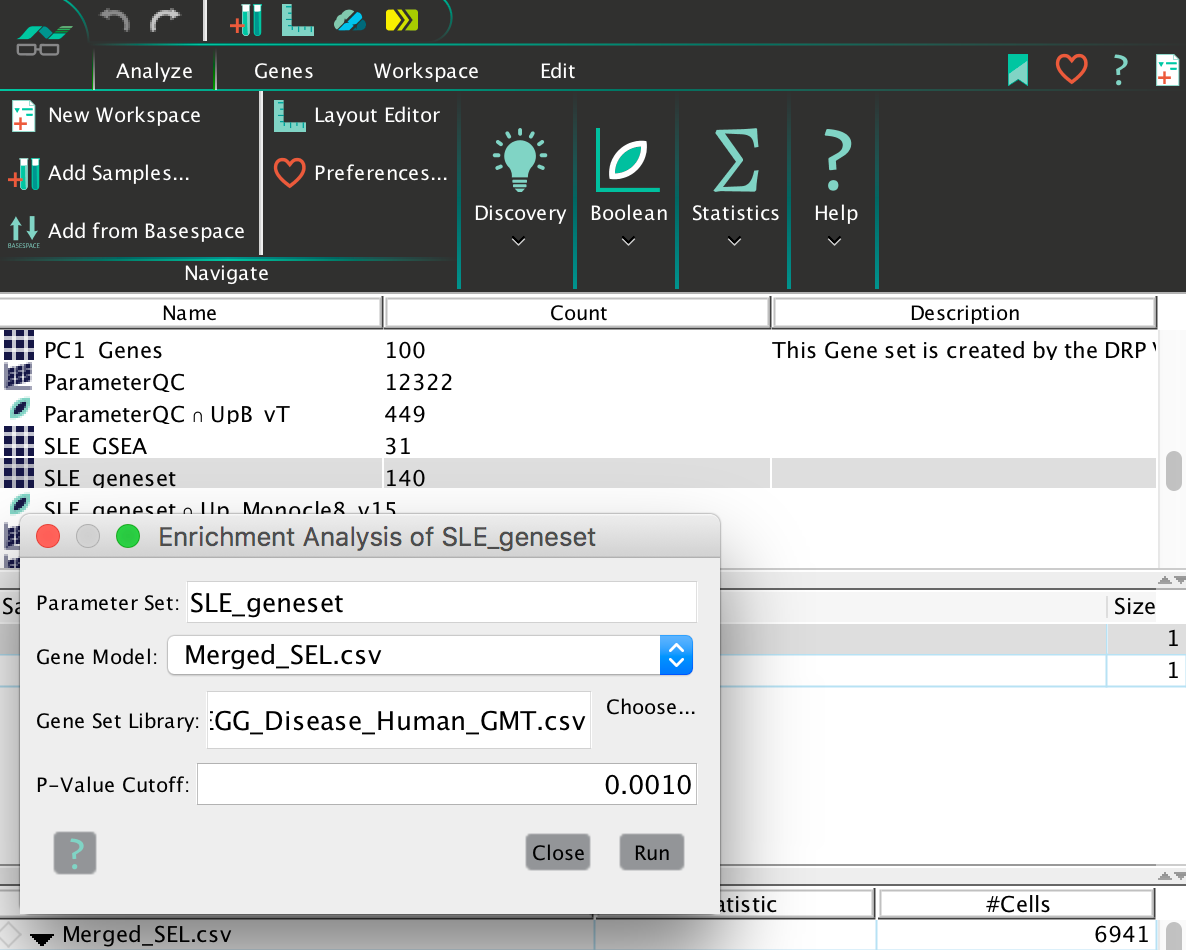 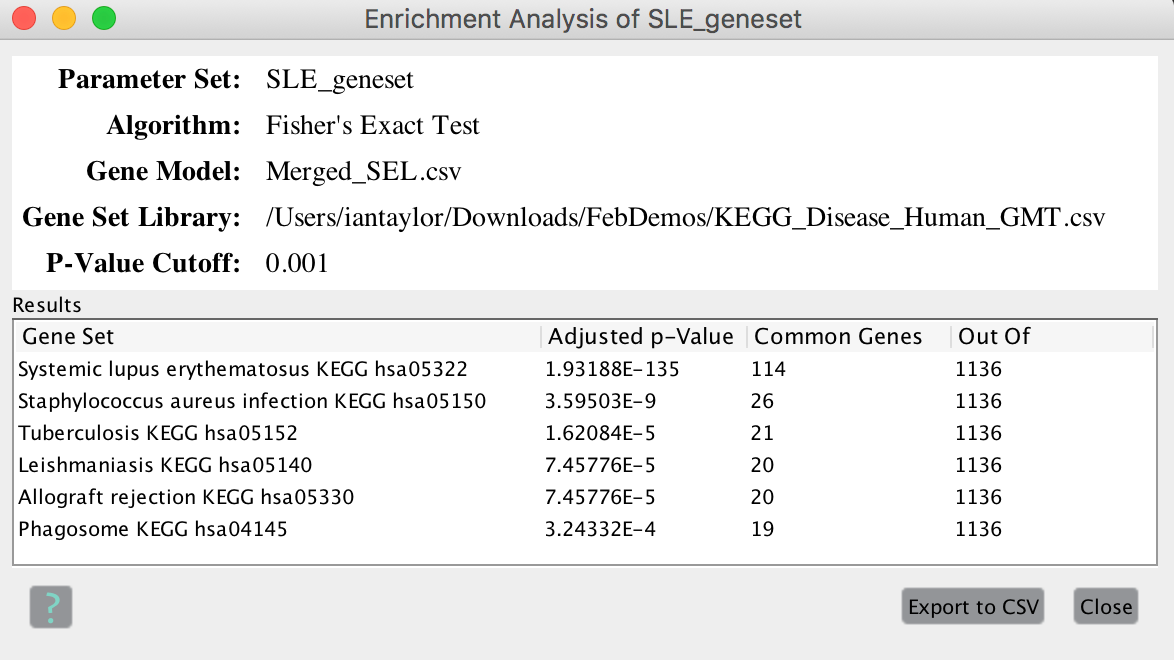 Note: The adjusted p-values reported by Fisher’s exact test are generally very low stringency.  Any conclusions drawn from enrichment tests should be validated by other means (e.g., experimentally).

For any question regarding the Geneset Enrichment platform in SeqGeq please contact tech support: seqgeq@flowjo.com