Transform digital data quickly and easily in FlowJo using the transform function on the graph window.

Flow cytometers collect analog information and convert it to digital information via hardware and software components during acquisition. The mathematics behind this conversion is complicated but can be reduced to the amount of resolution a cell or “event” has when its information is recorded. Events with low signal intensity (near zero) generally have lower resolution than events appearing higher on the scale when viewed on a logarithmic scale. This discrepancy gives rise to visual artifacts in graphs such as picket fencing. For a description of the differences between analog and digital data, see the section “Analog and Digital Data” below.

Picket fencing (i.e. broken lines displayed on digital data around zero) can be visually smoothed using FlowJo’s display biexponential transformation feature. It is important to note that transforming the data does not alter data in any way. If 1,000 cells are represented as double negative by a plot that has picket fencing, 1,000 cells are represented by a plot that has been visually smoothed by applying the biexponential transformation.

Below is a figure showing a normal plot on the left and a transformed plot on the right. The data is exactly the same. Only the scales have been altered to display the double negative population as a cluster. The data below was collected with the FACSDiva software. The sample was blank beads plus a few contaminants.

A biexponential transform will be applied to all digital data (fcs3.0 data files) based on the cytometer that the data was acquired on.

To adjust the Transformation for any parameter, select a parameter in the graph’s axis label drop down list. Click the transform (T) button on the graph window. 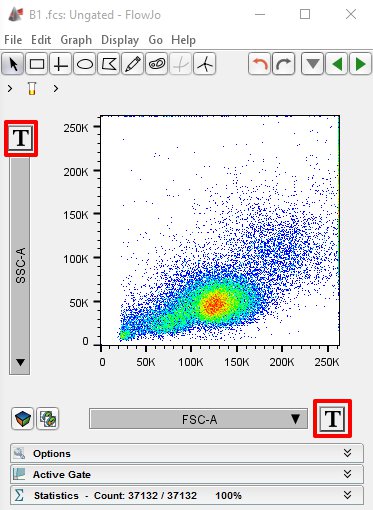 What are analog and digital data? All electronic equipment, from iPhones to flow cytometers, receive and transmit information in either analog or digital formats, or both. Analog data can be thought of as data in its most “natural” form. For instance, using film to take pictures or a microphone and tape recorder to record sound. The data in the form of light waves or sound waves are directly recorded onto some type of media, in this case, film. Analog data has the advantage of being entirely complete and therefore has no error associated with it, but is not compressible and usually requires large amounts of storage media (e.g. film, vinyl, tape).

Digital data on the other hand is “processed” information, or data that has been converted from its natural form into numbers (digits). This is done by sampling the primary information source (e.g. a cell passing in front of a laser beam, a sound wave) at multiple intervals and approximating some aspect of the data (e.g. fluorescence intensity, amplitude). Since digital data represents a sampling of the actual recorded data it will always have an associated error. Digital data has the great advantages of being compressible, easily transmitted and stored. A hard drive on your computer, for example, can store trillions of bits of digital data that would require multiple storied buildings filled with film if you were to store analog data.