Creating PowerPoint Slides and working with images from FlowJo in Powerpoint

There are several options for getting your analysis results and charts from the layout editor into Powerpoint, which are detailed below.  It is worth noting, however, that we have included many graphic and drawing tools within the Layout Editor so that you may manipulate graphics before importing them into PowerPoint.

When you “batch” a layout to Powerpoint, a series of PowerPoint slides will be made. Each slide will comprise an iteration of the layout with the data from a sample from the current group, or whatever other iteration option you have chosen.

To batch to Powerpoint, click the Batch button in the Layout Editor ribbon and change the output drop-down from “New Layout” to “Powerpoint.” 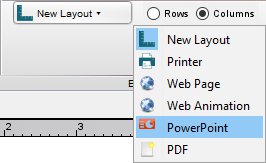 Select a location for FlowJo to place the file by clicking the directory field.  In the resulting directory window, you may name your file and select a location to which the Powerpoint will save (by default, FlowJo will create a file with the name of the layout from which the batch originated).

You also have the option of telling FlowJo to append the batched slides to an existing presentation by checking the Append check box that will become available after selecting the PowerPoint option from the New Layout drop down dialog.

Option 2: Copying and Pasting from the Layout Editor into Powerpoint

You may also copy and paste directly from the Layout Editor (or the Graph Window by selecting “Copy Image with Transparency” from the Edit menu).  This will utilize a rasterized image (a PNG), which as a result will not scale up very well.

Option 3: Saving the current layout as an image

There are several options for saving the current layout as image –
As always, there is preference to specify your preferred output.

Similarly, if you would like to create a PDF file of your batched layout click the Batch button in the Layout Editor ribbon (see below), select the PDF output option, and specify the output location and file name as described above. 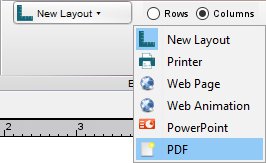 You may also save a layout as a PDF (as shown above), or print the current layout as a PDF.  The print dialog will allow you to select portrait or landscape format and to select the number of rows and columns.