Flow cytometers have optical channels that detect a very specific wavelength range of emissions from the fluorochromes.  A sequence of filters reduce the ranges of transmitted light. The detectors are all the same.  The breadth of the measurement made by any detector in the cytometer is determined not by the detector itself, but rather by the filters that precede the detector along the optical path. 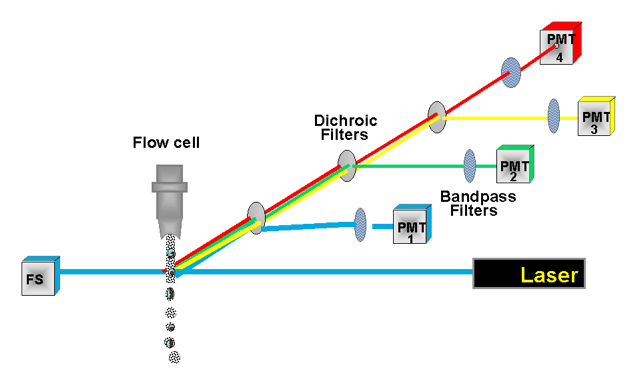 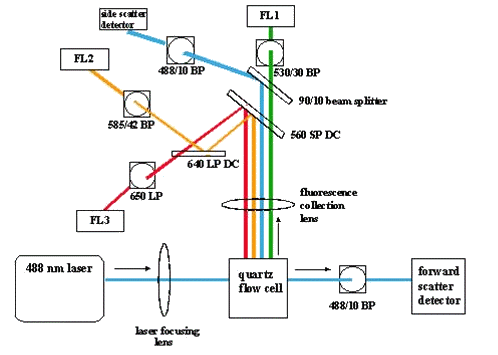 Manual creation of the compensation matrix is possible but requires a large amount of work.  Because of the exponential growth in the matrix size, it is not feasible with more than about 2-3 parameters.

As an exercise, lets walk through how to manually compensate using a two color FITC and PE example.

Imagine adding a third or even fourth parameter.  Way too much work!

Software compensation is much easier because all that is required is to identify the positive and negative populations in each single stain control and the software can calculate the MFI values and amount of spillover automatically.  This is done with a sophisticated algorithm that calculates the ratio of the difference in spillover fluorescence divided by the difference in the primary fluorescence for every combination of single stain control.  It automates the manual process to increase efficiency and reduce user error.

First and foremost, there must be a single stained control for every parameter in the experiment!

In addition, there are three rules for “good” compensation controls:

An important consideration is to select the sample with the brightest fluorescence of the experiment. “Dimness” is relatively irrelevant. Only brightest matters, and that is so that low spillovers can be accurately estimated. For example, if a spillover is so low that a MFI of 10,000 doesn’t cause enough spillover to be above autofluorescence, then the system assumes no compensation is necessary. At a MFI of 100,000, the spillover becomes apparent and then compensation value can be accurately assessed. Compensation is only about estimating the slope. The bottom line is that because the compensation coefficients are computed based on the RATIO of the DIFFERENCE in MFI’s (of the spillover channel and the primary channel), so small absolute errors in the position of the negative control become irrelevant as the positive controls become brighter. The error in the compensation coefficient is the sum of the absolute errors in the MFI’s of both the negative and the positive control; the latter has an inherently much larger absolute error than the former.

Each flurochrome has a unique emission profile.  Therefore, the amount of spillover will be different, even for fluorochromes that emit light at about the same wavelength (e.g. FITC and Alexa Fluor 488)

This rule is even more restrictive when applied to tandem dyes.  Each lot of tandem dye (PE-TR, PE-Cy5, PerCP-Cy5.5, APC-Cy7, etc.) should be considered unique and require its own single stain control. If a user is using two different lots of PE-Cy7 in an experiment, then they need to have two PE-Cy7 compensation single stain controls, one from each lot. Different lots will have different conjugation ratios, i.e. more Cy7 conjugates to PE or less.

Compensation controls must be treated in the same manner as experimental samples. This is because exposure to light and treatments like fixation/permeabilization may alter the fluorochrome, particularly the tandem conjugation ratio, i.e. lose some Cy7 on each PE molecule.

Of course, particles have some limitations.